Community Building Stack Exchange is a question and answer site for community managers, administrators, and moderators. It only takes a minute to sign up.

Anybody can ask a question

The best answers are voted up and rise to the top

Connect and share knowledge within a single location that is structured and easy to search.

How can automation be used to grow and manage an online community?

I've heard a little about bots being used to moderate chatrooms and got thinking about how automated replies and smart bots could be used for other aspects of online community building beyond just in a chatroom. Automatically commenting on a user's first post for example or up-voting posts which meet a certain set of criteria.

I'm really interested to hear if there are any examples of the ways in which automated replies have been used (and misused).

How can automation/bots be used to build, grow and manage an online community and are there any existing examples where this is already happening?

Bots are all over the internet. The good ones attempt to provide some bit of information to the user. The bad ones spew spam (or worse).

On reddit, there are several "good" bots that attempt to provide further information to users of the site. One of the most common ones you see is /u/autowikibot. This bot provides an except of a linked Wikipedia article in the comment thread. This is a link to their most recent post at the time of this answer (with screenshot below).

Another bot that is popular on reddit is AutoModerator. This bot helps to manage moderation activities.

Many of the bots you find on reddit are written with PRAW.

Stack Exchange, itself, has bots watching it that help users moderate. Smoke Detector watches the real time feed for common spam patterns and posts the results to rooms around the network. This ensured that spam that would have been missed on smaller sites is dealt with quickly.

Another bot on Stack Exchange is the SO-Chatbot, which was built to help out within the chat rooms. Automated replies can be created (ie. Don't ask to ask a question, just ask...).

I've mentioned other Stack Exchange bots in another answer, for more details.

Bad bots, however, are more easily recognized. While things like AutoWikibot may post a response, it is often considered useful, so not immediately recognizable as "a bot" (GASP!). Spam bots, on the other hand, spew garbage where ever there is an open textbox on the internet. The results are often similar to this: 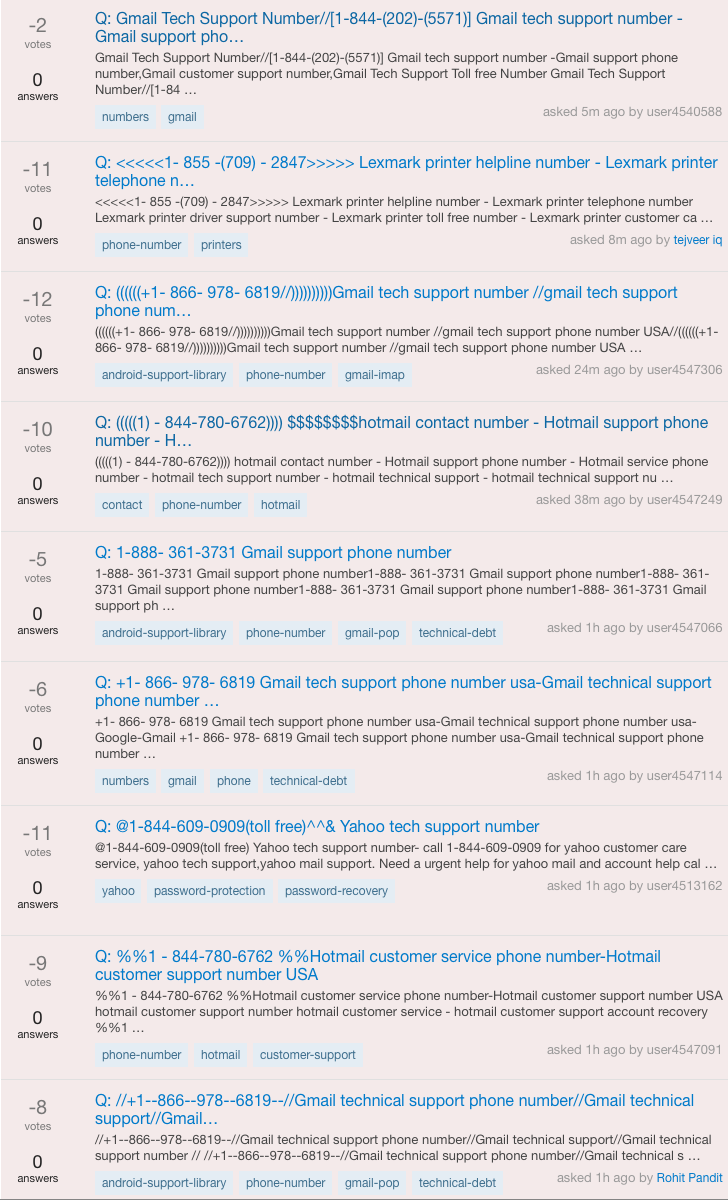 All of these were deleted via various automated processes, including the help of Smoke Detector (above).

To utilize automation to grow a community is tricky. If you have a bot handle all replies, you end up with a series of the same message over and over. "Welcome [Name]. Please don't ask to ask a question, just ask." This becomes noise.

Without investing a lot of time and research, it will be very difficult to get a bot that can mimic and hold a true conversation. Bots, at this point, are better at doing limited specific tasks. Holding a conversation isn't one of those things. However, they can add content (both helpfully and unhelpfully). In chat rooms on Stack Exchange, for example, there are automated feeds that bring content into the room to help users see that conversations are occurring. Using a bot in this manner is helpful, as it points users to places they should focus a bit of attention. It can also help start a conversation, which is really what you're after, isn't it?

Having great content does no good if nobody can find it. A bot that identifies related content could help.

Not the answer you're looking for? Browse other questions tagged site-growth content-curation or ask your own question.

10
How can I effectively moderate a chatroom without always being there?
10
Is the idea of crowd-sourcing moderation duties a reason to prevent automated processes from helping?

24
How can I keep up with my growing community
6
Managing and maintaining tagging infrastructure on a community board
8
How do you handle sudden growth and expansion in a mature community?
17
Community Leader is not productive and hurts site growth
7
Getting word out for community to grow
16
How can I get people to join a site and not simply glance and pass it by?
7
How can I bring a community around a wiki of a fictional world?
7
How can an online community measure its growth and development?
7
What tools can help a community to fight reposts?
6
How can I introduce topic based subforums to my site without splitting up the traffic too much?